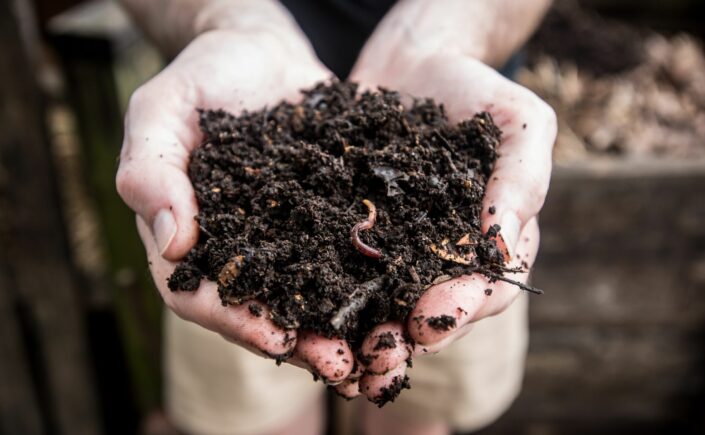 The decomposition of organics in landfills produces methane, a greenhouse gas that, according to the EPA, is 70 times more effective at trapping radiant heat than carbon dioxide. As a result, landfills have become the third-largest source of human-caused greenhouse gases in the US. In contrast, composting this material creates a valuable soil enhancer that replenishes depleted soils, protects against erosion, can replace synthetic fertilizers, and helps retain water. Composting our organics protects air, water, and soil quality.

“The only effective method to prevent methane emissions from landfills is to stop biodegradable materials from entering landfills. The good news is that landfill alternatives such as composting are readily available and cost‑effective. Compost has the added benefit of adding organic matter to the soil, sequestering carbon, improving plant growth, and reducing water use ‑ all-important to stabilizing the climate. Composting is thus vital to restoring the climate and our soils and should be front and center in a national strategy to protect the climate in the short term.”
-BioCycle magazine, August 2008

Significantly decreasing waste disposed of in landfills and incinerators will reduce greenhouse gas emissions the equivalent to closing 21% of U.S. coal-fired power plants. This is comparable to leading climate protection proposals such as improving national vehicle fuel efficiency. Indeed, preventing waste and expanding reuse, recycling, and composting are essential to put us on the path to climate stability.

“T(he) Copenhagen talks focused on the leading climate change culprit: CO2. But reversing global temperature increases by reducing carbon emissions will take many decades, if not centuries. Even if the largest cuts in CO2 contemplated in Copenhagen are implemented, it simply will not reverse the melting of ice already occurring …The most obvious strategy is to make an all-out effort to reduce emissions of methane. Methane’s short life makes it especially interesting in the short run, given the pace of climate change. If we need to suppress temperature quickly in order to preserve glaciers, reducing methane can make an immediate impact. Compared to the massive requirements necessary to reduce CO2, cutting methane requires only modest investment. Where we stop methane emissions, cooling follows within a decade, not centuries. That could make the difference for many fragile systems on the brink.”

Composting benefits the environment in many ways. When you compost your food scraps, you produce nutrient-rich soil that is needed to maintain healthy and productive farm fields. This closes an important loop and completes the cycle necessary to grow more healthy food. When it comes to global warming, composting directly reduces carbon dioxide (CO2) and other powerful greenhouse gases, like methane (CH4) and nitrous oxide (N2O).

Composting is an effective way to reduce greenhouse gas emissions. Many people believe that throwing food scraps and paper products into a landfill is harmless because the materials biodegrade. However, most people are surprised to learn that when these materials break down in a landfill they rot anaerobically (without oxygen) and become powerful contributors to greenhouse gas emissions. When food scraps are thrown in a landfill, the degrading material creates methane, a greenhouse gas that is 70 times more potent than carbon dioxide.

While it is true that some landfills try to capture the methane and use it as energy, many studies have shown that most of the methane gas from landfills is released before it is captured, and then more is released when they dig the trenches for the capture pipes. Capture rates are at most 46% in the best-case scenario (Institute for Local Self Reliance, Environmental Protection Agency). Landfills are the single largest human source of methane emissions in the world. Even with the best technology, most of the methane from landfills is released into the atmosphere.

Compost improves the quality of our soil and reduces the need for chemical fertilizers and pesticides. The end product of your efforts to compost food scraps and paper products is nutrient-rich soil. When this compost is used on fields it has many benefits:

Compost collection is an excellent supplement for at-the-source composting and allows for more materials to make their way from the waste stream into the soil. For people who cannot compost at home (because they have limited space or no yard, for example) curbside composting provides the opportunity for them to compost, too. Composting on-site at businesses is rarely feasible, so compost collection provides a way for restaurants and grocers to reap the environmental benefits of composting. Large-scale commercial composting facilities are carefully monitored and can handle materials that we would not easily compost in a backyard compost pile. For example, sustained high temperatures allow for the safe composting of meat and dairy products, as well as non-recyclable food packaging like waxed boxes, egg cartons, cotton balls, paper plates, and more.

A recent waste audit showed that of the material we throw away 34 percent is easily composted organic material and another 33 percent is paper, a substantial portion of which could be recycled or composted.

Taking organic material out of the waste stream has several benefits.

This valuable compost can be used to:

What is NOT compostable?

Where is our organics material being taken? Will it be burnt?

The organics will be taken to a facility to be turned into compost. It will NOT be burnt. The trash from your black cart will continue to go to the HERC burner and be burnt, as is done currently with all our garbage. The material in the green cart is diverted from this regular process which is much better for the environment. Click here for photos of the compost facility.

Has this been done before?

Hennepin County has sponsored pilot organics collections in Minnetonka, Wayzata, and Orono. It has also been city-wide and ongoing in Hutchinson MN. In fact, until the 1950s, organics were collected throughout Minneapolis-St Paul. Linden Hills will be the first Minneapolis neighborhood to re-start collecting.

What about yard waste?

At this stage, the city will NOT be collecting yard waste.

What about in the kitchen-is there anything I should do to prepare for the organics collection?

The organics cart from the city can be kept outdoors, wherever you keep your regular black trash cart. You may want to consider switching to a smaller black cart after a few weeks of the pilot if you find yourself having very little non-recyclable waste. As far as in the kitchen, there are a number of options. 1. Convert your usual kitchen trash can to biodegradable only, and place all the plastic/non-recyclable metal, etc elsewhere in a smaller receptacle; 2. Consider a pull out “trash drawer” for trash with multiple compartments so you can have the organics in one compartment, recyclable paper in another, non-recyclables in the third to fit your needs. Or 3. If you don’t have a lot of food waste you might consider a countertop compost container, however, these won’t fit fridge and freezer packaging and will need to be emptied more frequently. In all cases, just be sure to wrap your food scraps in newspaper or place in a compostable bag, so they don’t stick or freeze to the sides of the outdoor cart.

Check out: Your mode of transit affects your Carbon Footprint

No comments to show.